attention as a form of ethics (excerpt)…..

I know very little about this poet. Her website says she “lives in Brooklyn where she loves animals.” Her publisher’s website adds that she teaches poetry to children and English to immigrants. Photographs show that she looks young, is pretty and has glorious hair.

This poem came to me as email poem-a-day from poets.org.  I tried to find a fuller version.  There is a video of her reading a longer version here https://vimeo.com/358902549.

I believe the poem comes from her book Syncope.  About Syncope critic John Waters says “Syncope is poet Asiya Wadud’s profound, wrenching, and clarifying new book of poetry about the 2011 tragedy in which a boat filled with African migrants and refugees bound from Libya to Lampedusa, Italy was literally “left-to-die” in the Mediterranean. An act of recovery, of countermemory, of memorial, of resistance, Syncope represents one of poetry’s powers: to write the unwriteable, to bring voices, history, and lives forth from the depths.”

Her website uses scans of hands as graphics.  Scan can be a powerful form of photography.  I find her hand scans moving. 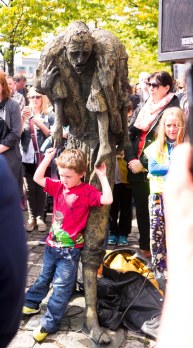 no one leaves home unless
home is the mouth of a shark
you only run for the border
when you see the whole city running as well
your neighbours running faster than you
breath bloody in their throats
the boy you went to school with
who kissed you dizzy behind the old tin factory
is holding a gun bigger than his body
you only leave home
when home won’t let you stay.
no one leaves home unless home chases you
fire under feet
hot blood in your belly
it’s not something you ever thought of doing
until the blade burnt threats into
your neck
and even then you carried the anthem under
your breath
only tearing up your passport in an airport toilets
sobbing as each mouthful of paper
made it clear that you wouldn’t be going back.
you have to understand,
that no one puts their children in a boat
unless the water is safer than the land
no one burns their palms
under trains
beneath carriages
no one spends days and nights in the stomach of a truck
feeding on newspaper unless the miles travelled
means something more than journey.
no one crawls under fences
no one wants to be beaten
pitied 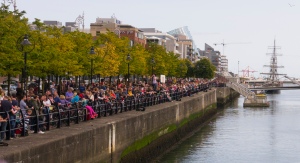 On the 5th of September at the Famine Monument on the River Liffey, a thousand people held a minute’s silence for refugees.  In the Great Famine/An Gorta Mor of 1842 to 1845, Ireland lost a quarter of its population to death and emigration.
Twelve thousand Irish people have so far offered beds in their homes to the refugees trying to find safety in Europe.  The government’s first offer was to admit 600.

Born in Kenya in 1988 to Somali parents, Warsan Shire was raised and still lives in London.