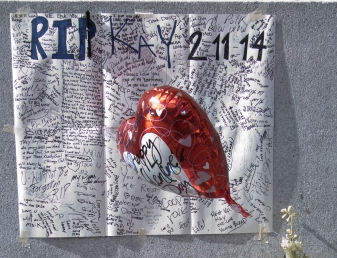 Each is composed of substances identical with the substance of all that surrounds him, both the common objects of his disregard, and the hot centers of stars  — James Agee, Let us now praise famous men

Ever peripatetic, I land in Dallas, Texas.  Throughout the airport are strategically placed volunteers ready to direct in-comers through the confusion of corridors.  The volunteers wear cowboy hats, cowboy boots and smiles.  I don’t expect to like them, but I do.  How can I not?  They are ripe with humour and good will.

After two glorious months in Dublin, I am back in the United States to deal again with my unfortunate choice in tenants.

Even before I arrive in San Francisco, I find myself greeted by the question that shadowed me as I left:  what part do I have of this country, whose people I like so much and whose government treats them so often with disregard and contempt?

Life in San Francisco is seductive: the expanse of ocean, the Mission where people are kind enough to understand my Spanish, the great roll of fog through the Gate, sunset among the decorous wine drinkers on Tank Hill, more affordable restaurants than I could ever eat my way through, North Beach and it’s memories, the vegetable markets of Clement Street, the free box at Green Apple Books, and, a glory and a prophylactic against my final surrender, the main branch of the San Francisco Public Library.

The library —  light filled, book filled, talk sponsoring, exhibit hosting  — rises with Beaux Arts grandeur on the edge of the city of the damned. In the morning, people who’ve slept rough roll up their bedding on the grass that runs between the library and the gilded dome of San Francisco City Hall.

In the afternoons on the library steps and in the shade of the trees across the street, the homeless sit.  They are identifiable by the mounds of personal belongings that sit beside them.  At times there is someone on a corner or leaning against a lamp post or at the bus stop or in the street who can’t take it any more, who is gesturing, mumbling, waving, yelling or weaving among the cars.

Without the library and its environs, I would become inured,  seduced and captured by the American cornucopia.

The library,  vestige of a vanishing communality, a place in which we are all briefly equal, provides a balm for the rawness I feel at my comparative privilege — given to me by education, skin colour, and luck.

It is a  self serving comfort and of no use.  It is not nearly as helpful as the small cheques my mother wrote every few months to antipoverty campaigns, women’s rights groups, environmental warriors, cheques so small that their value was probably used up in the regular snail mailings of free calendars, petitions, address labels, membership cards, and appeals for more money  such donation’s attract.

Recently, leaving the library, I see a figure on the on the street at the foot of the Pioneers Monument that stands, its Eureka rampant, between the library and the Asian Art Museum.

I and two homeless men go over. It is a girl in a foetal curl. Her black trousers are pulled down slightly, exposing her lower back. The trousers are worn and have the patina of street. I can see a tattoo, an edge of breast, the very short hair on the back of her head.  A mobile phone is held tightly to her ear. She is alive, she is conscious. The two men and I stand a while considering what we can do. In the end we do nothing.

It seems to me the perfect cypher for me in America. I’m here, I know there is a problem and I don’t know what to do.

Each is composed of substances identical with the substance of all that surrounds him, both the common objects of his disregard, and the hot centers of stars: All that each person is, and experiences, and shall never experience, in body and mind, all these things are differing expressions of himself and of one root, and are identical: and not one of these things nor one of these persons is ever quite to be duplicated, nor replaced, nor has it ever quite had precedent: but each is a new and incommunicably tender life, wounded in every breath, and almost as hardly killed as easily wounded: sustaining, for a while, without defence, the enormous assaults of the universe.
So that how can it be that a stone, a plant, a star, can take on the burden of being; and how is it that a child can take on the burden of breathing; and how through so long a continuation and cumulation of the burden of each moment one on another, does any creature bear to exist, and not break utterly to fragments of nothing: these are matters too dreadful and fortitudes too gigantic to meditate and not forever to worship.
James Agee, Let us now praise famous men

This site uses Akismet to reduce spam. Learn how your comment data is processed.